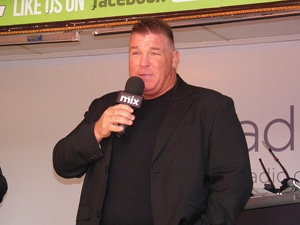 Joe’s story is one of triumph over adversity. His fun and fascinating after dinner speeches combined with question and answer sessions are delivered with enthusiasm and give an insight into an ongoing fight to be recognised as one of the toughest men on the planet.

Speeches are customised to meet your specific requirements and can be tailored to personal, sporting and business audiences alike.

For a speech that really packs a punch, book Joe today by calling Yogurt Top Media on 01543439239. Alternatively, get in touch online by following the link below.

A celebrity personal appearance can add that special ingredient to any event, resulting in a truly unforgettable occasion. Having an Irish Heavyweight Boxing Legend and Hollywood actor hosting an event or making a personal appearance will certainly leave guests with an evening they most definitely remember.

Joe is available for venue openings, media appearances, event hosting, product launches, auctioneering and educational visits. A personal appearance can incorporate a question and answer session, a chance for guests to have a commemorative photograph taken with Joe as well as autograph signings.

To book Joe, call Yogurt Top Media on 01543439239. Alternatively, get in touch online by following the link below.

Celebrity endorsed products have a substantial impact on consumer markets. Celebrities not only have the power to instigate immediate consumer trust in the product they are endorsing but they also generate significant media exposure. In turn this adds value and credibility to your product, raising awareness and attracting new audiences. At Yogurt Top Media we work in partnership with each client to develop a unique creative concept that establishes a bond between Joe Egan and your product in order to achieve sustainable promotional success.

As an Irish Heavyweight Boxing Legend and Hollywood Actor, Joe’s charm and enthusiasm makes him an attractive choice for any campaign, whether it be television, radio or press advertising.

To ensure your product goes the distance, book Joe today by calling Yogurt Top Media on 01543439239.

When it comes to charity, Joe has a ‘heart of gold’ and does a massive amount of work with charities in Birmingham’s Irish communities.

In 2008, the former Irish Heavyweight Boxer also launched ‘Let’s Knock out Bullying’; a campaign which aims to support victims of bullying by bringing professionally trained counsellors to schools across the UK.

Joe is a prime example of what can be achieved with hard work, determination and perseverance. After suffering years of abuse from playground bullies as a child, he is now working to support the thousands of young people suffering in silence.

Speaking of a cause close to his heart, Joe said: “There are young people in this country committing suicide as a result of bullying. If this campaign makes a difference to one life, it will have been a success, but we hope to make a difference to many young people across the country.”

For more information about Joe’s charity work, call Yogurt Top Media on 01543439239. Alternatively, get in touch online by following the link below.