The eldest of 7 children from Ringsend, Ireland, Big Joe, as he is affectionately known, has led what can only be described as a life full of great memories, people and events, but it wasn’t always easy: “I started to box, not only as my father was a keen boxer, but also to stand up to playground bullies. I had to learn to look after myself.”

Joe’s start in boxing came when his father, who had been an amateur boxer, put the gloves on to see how Joe would shape up. Learning to box at the Earlsfield Amateur Boxing Club aged just 10; Joe fought hard and gave all he had. Dublin’s Phoenix Club was the venue for his first fight, but his opponent, Junior Champion Steve Collins turned out to be quite a challenge for the 12 year old: “He pounded me to a pulp, absolutely hammered me. I lost on points but I went the distance.” 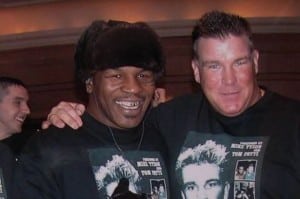 Working hard in the gym, Joe began to make a name for himself, but struggling to get match-ups, he raced through to the senior level, fighting men 10 years his senior. Aged 17 Joe travelled to the USA with the Irish Boxing Team for training in Atlantic City. It was here he met boxing legend and 2 times Heavyweight Champion, Floyd Patterson. Patterson soon discovered Joe could hold his own and asked him to stay in the States to become a sparring partner for a promising new Heavyweight Boxer called Mike Tyson. Joe joined the Catskills Boxing Gym in New York, where he lived and trained with Tyson for two years. With the support of the great Cus D’Amato the pair became great sparring partners and lifelong friends.

By the age of 24, the 6ft 1in fighter was a Golden Gloves Champion with an impressive record of over 80 wins and 7 Irish titles to his name. Joe fought 11 times wearing the green vest of Ireland and although unfortunate not to have made the Olympics, he certainly attracted some attention going the distance with 3 times Heavyweight Champion Lennox Lewis in 1985.

It was the win against World Heavyweight Champion Bruce Seldon in 1988, which this modern day gladiator describes as his greatest achievement: “It was the best win of my career. I beat him on points in his hometown of Atlanta.” The fight had it all and enthralled those at the ringside. Sharing a post-fight ambulance with Joe, Raging Bull Jake LaMotta enthused: “The Heavyweight. Great fight, kid, great fight.”

Joe eventually signed pro in 1990 and won his first two fights; but his boxing dreams were cruelly shattered when he was forced to quit following a serious road accident on the night of his second professional fight. Then in May 2004, after an absence of 12 years, ‘The toughest white man on the planet’ made his ring comeback aged 38. Joe fought once, winning by technical knock-out and despite being offered a place on Mike Tyson’s undercard, retired from the sport saying: “I had nothing else to prove to anybody, nothing left to prove to myself. I’ve been hit in the chin by some of the best punches in the world but they never once knocked me down – something I can be proud of.”

For more information on Joe, call Matt at Yogurt Top Media 0154 343 9239 or via email at matt@yogurttopmarketing.co.uk