In 2008, Joe made a successful transition from the boxing ring to movie hard man, appearing in several independent films and television dramas, including BBC One’s ‘Hustle’. As Joe gained experience, his acting career went from strength to strength. His big break came when he was personally approached by acclaimed filmmaker Guy Ritchie to play a part in his film ‘Sherlock Holmes’, a dynamic new portrayal of one of Arthur Conan Doyle’s most famous characters. Starring alongside Robert Downey Jr. in the lead role of the Baker Street detective and Jude Law as Dr. Watson, Joe played ‘Big Joe’ in the 2009 Hollywood Blockbuster and its sequel, ‘Sherlock Holmes 2’ in 2011. 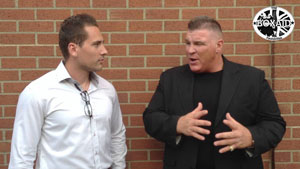 There is nothing more this movie hard man loves more than playing the gangster and as a youngster he always dreamed of playing the ultimate Bond villain. Watch out 007!

Truly passionate about acting, Joe is available for film roles and television castings through Yogurt Top Media. He is also a prominent after dinner speaker and host, bringing expertise, personality and charisma to any event, entertaining audiences with anecdotes from his action packed career as an Irish Heavyweight Boxing Legend and Hollywood actor.

For more information, call Yogurt Top Media on 0154 343 9239. Alternatively, get in touch online by following the link below.

“Joe is a very talented actor, a pleasure to work with and a star of the future. I’m sure i will be working with him again”

“A genuinely nice and true gentleman, we will certainly be seeing a lot more of him in Hollywood”

“If a tough guy is needed in one of my future films, I will have no hesitation to recommend Joe for the part”

“Fantastic actor and personality to have on set”